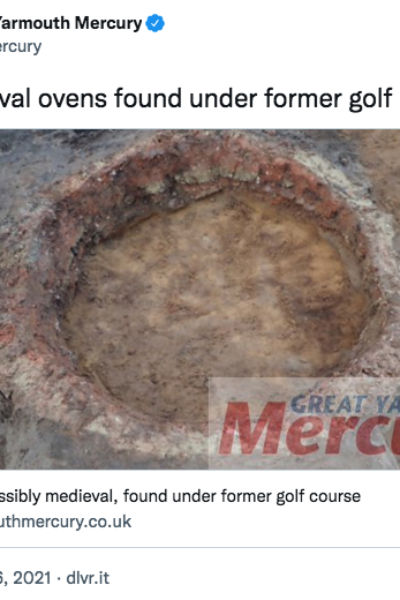 Another archaeological find is made on an English golf course

Just days after it emerged that a 4,000-year-old coffin containing a high-ranking individual had been found at a Lincolnshire golf club, two ancient kilns were discovered in Norfolk.

Tingdene Holiday Parks received a building permit to build 157 static holiday trailers on the site, but a condition of the permission was that development must wait until an archaeological work program has been completed.

The archaeologists therefore dug 21 trenches on the ground and discovered the ovens.

According to a report published by CFA Archeology, the largest furnace was a circular clay structure and likely would have had a domed roof.

“The smaller structure was less than a meter from the large one and was of simpler construction,” he adds, before saying that it could be a second oven or a raised hearth. with an open top that could have held a large pot or cauldron.

Samples taken from inside the kilns found small amounts of charred grain.

The report, posted on the Great Yarmouth Borough Council’s website, states: “Since the grain would have been ground into flour before it got to the bakery, this grain is a bit of a mystery.

“They may have been tossed in the oven to test the temperature or used to keep breads from sticking during baking.”

The grain still provides a clue to the original era of the kiln.

“The profusion of charred oats indicates a medieval (14th century) or later date,” he said.

He says use of the site may have been linked to the growing population of the area at the time and the food pressures that followed.

The area may have been part of the nearby Caldecott Manor House, at a time when “the weather hampered crop yield.”

As a potential fire hazard, bakeries or ovens may have been located some distance from main buildings for safety reasons.