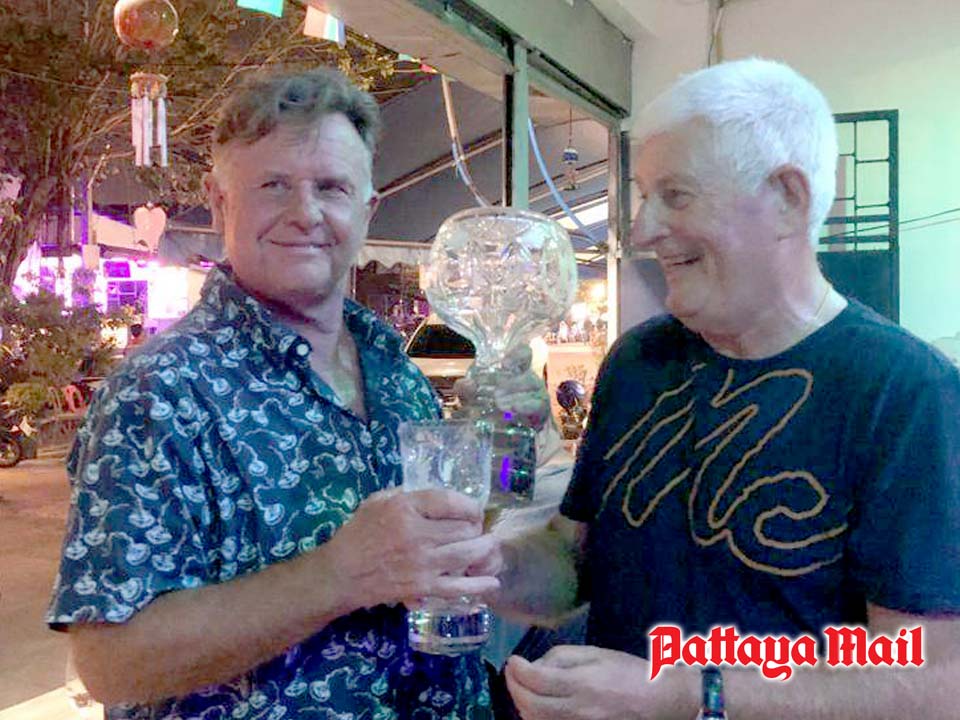 Monday’s game in Khao Kheow was a futile exercise at best. At times the wind was almost gale force, certainly the strongest wind remembered for playing in Pattaya, and made the course virtually unplayable. The course itself was in the worst condition we have seen in a long time, the fairways were largely brown and with very little grass, the greens were substandard, rough and bumpy, and variable speed. The leaf litter was strewn across the course and in places so dense that at least one player lost a ball somewhere in this litter. If there was one positive point, it was the bunkers, which were well raked and in good condition.

Coupled with a number of players with trainee caddies, the lump sum fee of fifteen hundred baht was of very poor quality and would not encourage greater patronage. As it is, we appeared to be the only people on the course, so unless there is a major overhaul in the application of high season rates to a course in very poor condition, it will remain poorly taken care of. .

Under these circumstances, the score was acceptable, showing the Glover family at the top of the board with Kob beating husband Niall on the countdown. Paul Smith also had the same score in third place, almost a failure on his part as he had twenty of the top nine. Tony Robbins completed the scoring with thirty-three points.

A dusty Daryl Vernon who may have had too much fun since returning to Pattaya managed to snag a nearby pin, while the very consistent Greg Berry managed two. It seems to be dominating close pins lately.

It was a particularly difficult day for our regular visitor to the Isle of Man, Tony Scambler. He was one of the unlucky ones with a cadet apprentice who could not speak English, would not drive the cart down the aisles despite being dry and rock hard, and was no help whatsoever. In all fairness, someone who plays as long as Tony shouldn’t need the help of a trainee caddy reading putts.

Ending on a positive note, the Glovers were kind enough to ring the bell, a sound we haven’t heard in a long time and very welcome as well.

A record number for about two years with twenty-six participants in the first annual round of the club championship held in Pattavia. The conditions were perfect for golf with clear blue skies, warm temperatures but not too hot and a course in good condition. As is especially the case in Pattavia, the greens were fast and difficult with anything above the pine a real challenge of line and speed.

Another company was ahead of us but had no impact on the speed of play with the round completed in an acceptable time. For the sake of fairness, a drawing of lots was used to establish the groupings which gave rise to curious combinations. Before leaving the bar, Ken Davidson organized a raffle that offered some curious choices.

For the second day in a row, the Glover family finished in the top two positions as Niall took top honors this time around with an exceptional score of sixty-eight net, five full strokes ahead of his wife Kob on seventy-three. Third place went to the wily John Hughes at net 74.

Colin Greig came in fourth ahead of fellow Scotland player Bob Innes who had a few shocking holes after a thunderous start but managed to pull him together and finish solidly with a respectable seventy-five in fifth place. Rounding out the top six, Kevin LeBar, who is arguably the group’s most consistent player on this course, finished in sixth place with seventy-six.

A number of our more established players such as Paul Smith, Les Cobban, Greg Berry and Nic Evans threatened at times but eventually fell back onto the pitch, so with a five-stroke lead Niall Glover is the overwhelming favorite to get his name. . the honor roll. But stroke play can change the scoreboard in the blink of an eye, so who will it be?

All nearby pins were presented with one to Niall & Kob Glover, Jimmy Carr and Paul Smith.

As is customary, players out of the race start first with those considered to be in the race last. A field of twenty-six was a good number under the circumstances and, as the results show, the competition was fierce with some of the best scores anyone can remember. From the results, it appears that the higher handicap players had a serious advantage, coupled with playing on the shorter white tees. Throughout the back-to-bar presentation there was a lot of talk, especially regarding disabilities and the S word was used more than once.

The day was clear and sunny with a light breeze, the course was in good shape so no apologies from anyone. It is remarkable how quickly the courses start to deteriorate due to the lack of rain and although today’s course was fine you could see how quickly it would turn brown and bare without rain soon.

In what can only be described as an outstanding performance, Colin Greig came back from seven strokes to win by a margin of three. Apparently he hasn’t missed a put all day. No doubt the handicappers will take the knife from his ridiculous handicap of fifteen for next week.

Another high handicapper who seems to get better with every game he plays, Bob Innes came in third with 43 points. Tony Robbins, also in the over forty range, was fourth with forty-one points, one ahead of Kevin LeBar in fifth, Geoff Parker rounding out the scoring with thirty-nine points. Of all those who made the list of winners, Kevin LeBar appeared to be the only one playing with a suitable handicap.

The nearby pins were taken by Daryl Vernon, Colin Greig, Bengt Engstrom and Kevin LeBar.

Back at the bar, there was a lot of celebrating with the sound of the bell ringing all night, albeit a silent bell.

Reasons you might need to apply for a payday loan