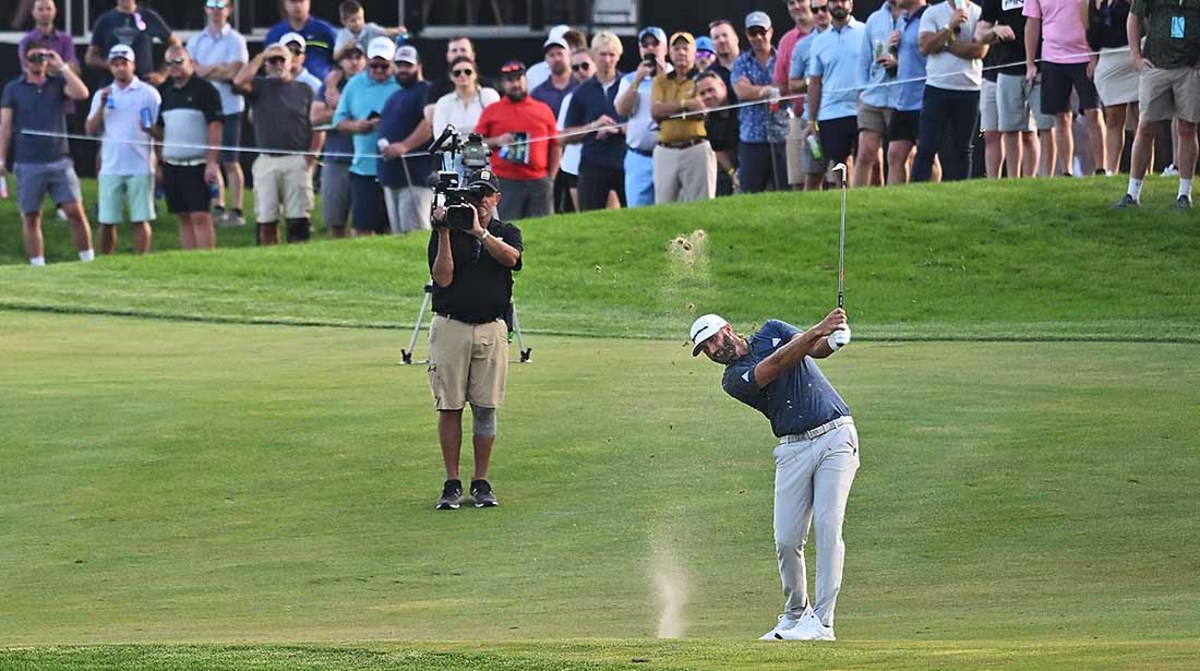 Since my football team lost 21 points in the fourth quarter and lost at home to a franchise that has made the NFL playoffs three times in the 21st century, the switch to a golf tournament last weekend offered a certain therapeutic appeal, which might be the most beautiful thing. ever said about the LIV Golf TV experience. Sunday afternoons can be stressful enough when your favorite ball club can’t stop the forward pass. However, when it comes to a 54-hole event with a shotgun start and meaningless finish, there’s no such angst.

There’s no reason to worry about who wins. It is a blessed state of mind.

Still writhing from the 469 yards and six touchdowns we gave up in the air, my emotional balance hadn’t improved to the point where Sunday night’s NFL presentation was an option. That meant more golf, this time from the PGA Tour, although the final round standings in Northern California weren’t exactly must-watch TV.

The differences between the two shows were striking. The Golf Channel‘s coverage of the Tour’s season-opener was an airtight production ably managed by three quality announcers, while the LIV show still lacks the polish and depth of knowledge you expect from a golf operation. big league. Like a lot of stuff posted on YouTube, it seems to be homemade for the nuanced viewer, which would be nice if we were talking about grandma’s cookies, not some new product with a very inflated opinion of itself.

My GM spent $70 million and a first-round pick to rebuild his high school this offseason. Guess what? He didn’t get his money’s worth, and neither did the Saudis. David Feherty, who has delighted audiences for two decades as a curator of wicked humor and a purveyor of offbeat ideas, seems to have been given some peace of mind since he blew up the big bucks in the rival league.

A quiet Feherty is somewhat unnerving, especially in his new role as LIV Golf’s senior analyst. What few people know is that he and Greg Norman are longtime friends, which might explain why the Shark splurged on such a presence in the pit, but the bright lights had minimal impact. . Feherty seemed distracted, almost disconnected, during the final in Chicago. The live stream was plagued by several long stretches in which no one said a word – 30 seconds of dead air in the TV industry translates to around 18 months of real time – a notable diversion by compared to the exaggerated gabfest two and one -and a half months ago in Portland.

Not that viewers find an abundance of insight when someone speaks. Asked about a 20-foot save by Cam Smith early in the back nine, Bubba Watson, who was trailing the top three in an attempt to impersonate a reporter on the course, busted the 48-ounce can of snaps that most tour professionals can I can’t live without.

“He showed a lot of courage trying to win this tournament,” Bubba replied. You can’t run to the corner store and buy such wisdom, friends.

What was Watson doing with a microphone, anyway? Norman gave him the usual outrageous loot to come and join the rebel fray, but he still didn’t play, apparently due to injury. Bubba is a good guy and all, but he’s not an announcer, which he proved conclusively in Chicago. It’s laughable the way LIV Golf tries to make friends while ostracizing their enemies, much of which has to do with their lack of recognition of the value of visual support.

Over 99% of all golf fans get their fix by watching it on a screen, without attending tournaments in person. Presenting such a heavily funded company to the public in such a poor way is strategically criminal and ironic. Norman shouldn’t want anyone watching his show right now. Not dressed like that.

The Tour, meanwhile, refrained from responding to the taunts and blows hurled by their arrogant opponent, opting to hide behind a wall of lawyers and wait out the storm. Norman’s statement that he doesn’t want a truce because his upstart is already successful, Phil Mickelson’s comment that the two organizations need to get stronger because the little guy isn’t going away…all n is all hot air and gesticulation.

Until the young agitator figures out how to present his product to the general public, Camp Ponte Vedra has nothing to fear. Deane Beman was keenly aware of the importance of television as a priority for the overall health of the sport when he took over as commissioner in 1974 – he began buying out the rights to every event immediately after getting the job. Fifty years ago, ownership of the media was owned by the tournaments themselves.

Even an authoritative visionary needed until the late 1970s to complete the task, but Beman did it. Unlike the general manager of my team or the billionaire sheikhs, he got more than his money’s worth – those purchases laid the foundation for what has become an undisputed sports empire. From this perspective, it is difficult to imagine a greater gap between two competing entities on a growth element of such importance.

A YouTube deal just won’t cut it. The relationships with its television partners are perhaps the Tour’s greatest strength, and for that, it manages the particularities of the programming with both hands. Because it’s a conservative approach with little tolerance for on-air criticism or risky subject matter, the networks are happy to comply. And while Golf Channel has no choice but to follow, the Tour knows how crucial this partnership is to brand consistency.

Last Sunday’s offering was a perfect example. Anchor Terry Gannon and pit analyst Curt Byrum were superb on a weird day that included tons of rain and a TV show that opened with the final group on the 16th hole. The decision to go live on top was surely an easy decision – you really don’t have much choice these days – and when Danny Willett spoiled his first American victory in more than six years with a three-putt inside four feetyou had to be at least half crazy to stay for the full replay.

Byrum gets no credit, let alone the accolades, he deserves for the work he does in the early rounds at the heart of the season and as the lead voice at lesser events. He’s so much better than CBS cheerleader Ian Baker Finch it’s not even funny, but it’s not meant to be. Despite his stand-in status, Byrum shows up for every mission ready to talk and exceptionally well-prepared. He’s not an actor, but he’s not a pastry chef either. He tells you what he sees, and in keeping with the core strength of a strong analyst, he sees a lot.

Gannon seems to have been around forever, and for good reason. It’s another wonderful resource that seems to turn up when you least expect it – wasn’t he organizing an ice skating competition for a major network last weekend? His versatility resonates wonderfully when organizing a gathering of the little white ball, bolstered by extraordinary conversational skills that get the most out of every guy sitting next to him, even the shy Nick Faldo.

As was the case when he played for Jim Valvano as backup point guard for NC State’s national championship team in 1983, Gannon still knows how to run the show. The fact that he and Byrum weren’t elevated to a higher level of big event visibility may be their choice, but excellence doesn’t care how many tournaments you cover or how much money you you win. It’s another way of saying that the Tour’s reserve announcers are head and shoulders superior to anyone currently beating their gums for LIV Golf.

Until Norman finds some real goers, this aversion to a truce is surely a ruse.

Reader comments are welcome at [email protected] and we can publish your letter (include your name and hometown). Click here to get all the latest Morning Read news and commentary free to your inbox every morning.