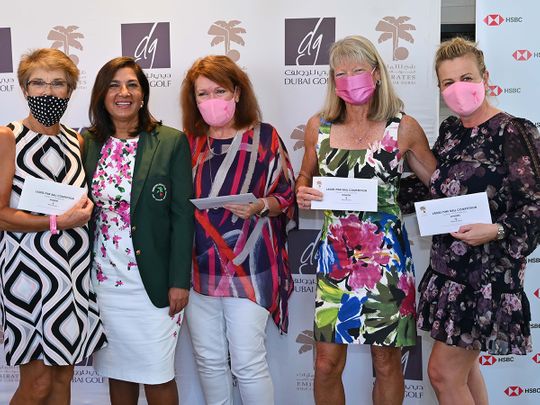 Ladies painting the course pink at the Emirates Golf Club

The event hosted 67 golfers during Breast Cancer Awareness Month, with Fiona Berry, Sue Hopwood, Anita Jopp and Maureen Platt crowned today’s champions after posting an impressive 87 points. The quartt produced a solid round of golf, which included five birdies at the net and three Eagles at the net over the last nine.

Naima Maya, Martha Wong, Najla Bartette and Maura Duggan took second, narrowly losing to a better back nine. The group got off to a good start to the last nine, achieving three raw birdies and two net birdies between holes ten and twelve, followed by a raw birdie on hole 16.

Third place went to Helen Strivastava, Maya Strivastava, Josie Tracey and Rekha Bandopadhay, who had three raw birdies and one net birdie on the top nine to score 86 points.

In activations, the closest to the pin of two at hole 2 (0-18) was won by Jennifer Bang and the most direct drive at hole 8 by Haide Wright. The closest to the hairpin out of two at hole 17 (19-36) was won by Kiyono Taniuchi. Throughout the tour there were a few extra activities including Maria Petre winning a Maserati for a weekend and Anita Staahle winning an Odyssey putter.