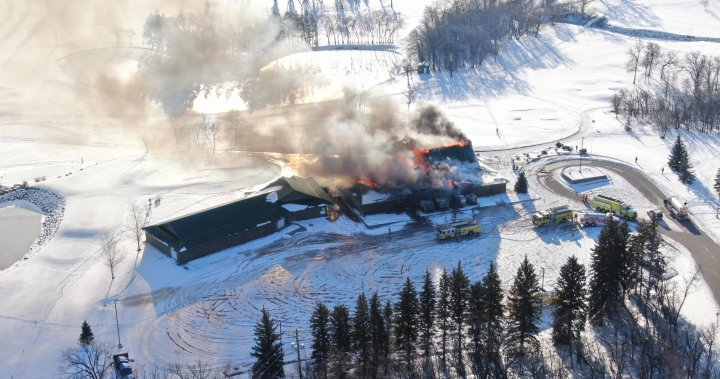 The clubhouse at Minnewasta Golf Course in Morden is considered a total loss after a fire ravaged the building on Saturday.

Smoke and flames were streaming through the roof of the building when firefighters arrived around 9:15 a.m., Morden Deputy Fire Chief Tim Reimer told Global News.

“The extent of the fire put us pretty much in a defensive mode, where we had to fight strictly against the fire from outside the building and protect the adjacent building, known as the pro shop,” explains Reimer.

Reimer said the crews brought the blaze under control by noon. Then they focused their efforts on extinguishing the hot spots, before beginning their investigation into the cause, which has yet to be determined.

“We probably had about 40 firefighters on the scene, as well as two pump trucks, an aerial truck, a rescue vehicle and a few other command vehicles,” Reimer said, adding that they had received assistance from the firefighters of Winkler.

The club house contained a restaurant and a banquet hall.

Reimer says no one was hurt and the site has been turned over to insurance companies, who will launch their own investigations.