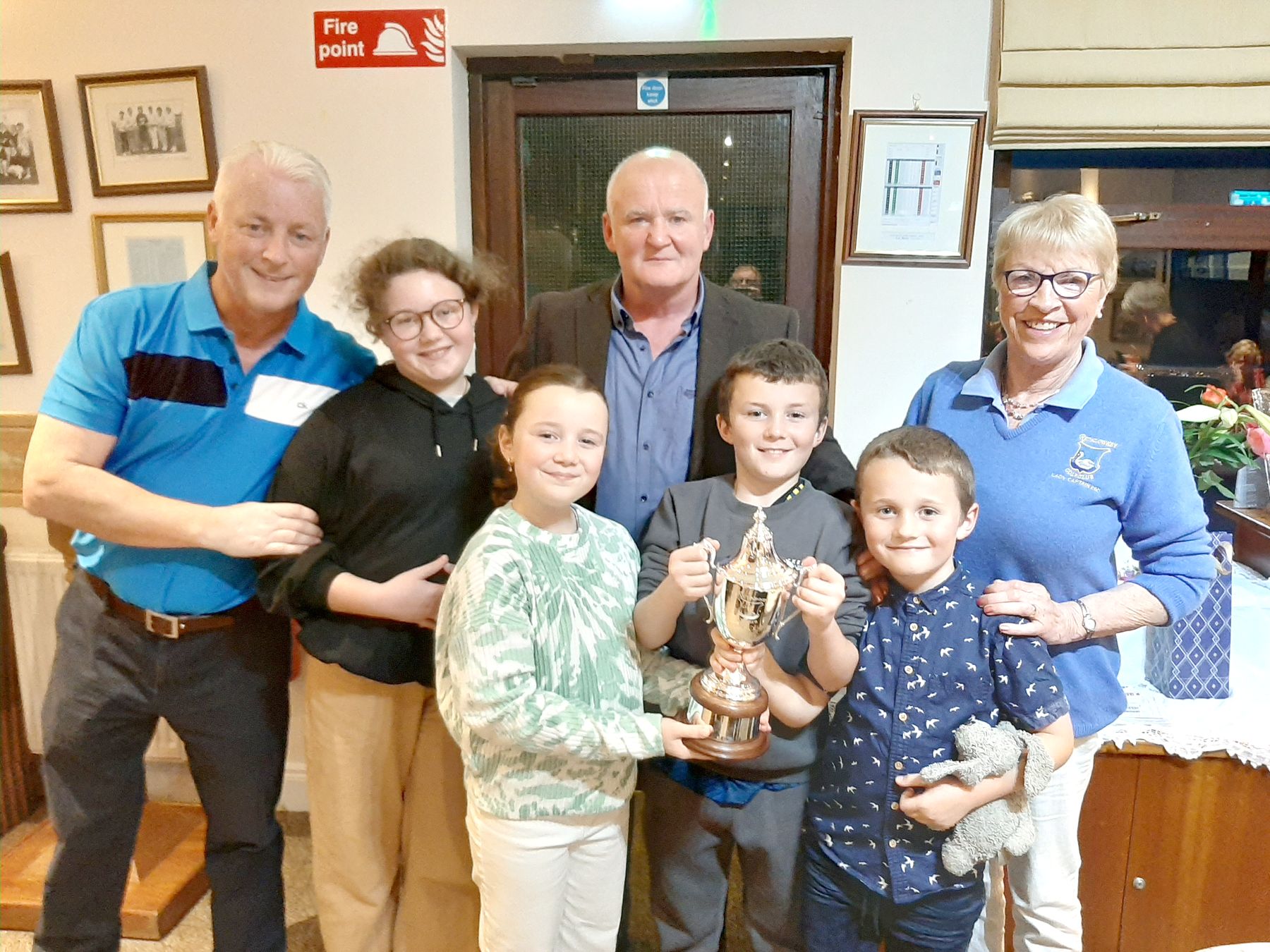 Brian and John Cahill with Eileen Dowling (Lady Captain) and the grandchildren of Teresa, Clodagh, Cora, Jack and Rory

THE name of Teresa Cahill is well known at Rathdowney Golf Club and now, thanks to the generosity of her family, she will be forever remembered.

On Saturday September 25, John and Brian Cahill presented – on behalf of the Cahill family, Annmarie, Paula, John and Brian – the Teresa Cahill Perpetual Cup in memory of their late mother, Teresa at the Rathdowney Golf Club.

Teresa was a longtime member and staunch supporter of the Rathdowney Golf Club. John and Brian presented the cup to Lady Captain, Eileen Dowling and spoke with humor and warmth about their parents, Jackie and Teresa, and the attrition of family life, business and golf and Teresa’s accomplishments in the three.

Teresa joined the Rathdowney Golf Club in the late 1950s. Her husband Jackie was captain in 1958/59. At that time, women were just associate members, it took a few more decades for that to change.

In the 1950s, golf for women was considered only a leisure pastime, and mainly by the ladies who lunched. Teresa transformed it all, with Jackie’s help. She quickly introduced competitions and interclub matches. In other words, she has a plan in place for the current Ladies Club to build on.

Club matches also involved catering, which was also provided by ‘The Ladies’ for the men. This continued at a steady pace until the late 90s. Not only did Cahill’s Butcher Shop provide the meat, but Teresa also cooked it, accompanied by her delicious sauce.

She was a tireless worker and displayed great energy. His golf continued at a steady pace. For many years she was the club’s lowest handicap player. She was a member of the victorious Midland Trophy team which won against Mountrath in the 1984 final. It was a great achievement for a 9 hole course.

Teresa won the Junior Scratch Cup in 1988, which was also a superb achievement. She was well known and well respected on the golf circuit and encouraged her fellow golfers to give Rathdowney a try.

She was twice Lady Captain and also Lady President. In recognition of all she had given to the club, the title of Honorary Member was duly bestowed upon her in 2019, which also coincided with her 60 years of membership, not to mention that she was also a director for many years. many years.

Teresa will be remembered for her charm, kindness and encouragement that she gave us all and especially her elegance and balance.

The Cahill family would like to thank everyone who contributed to the event, especially Ann Creagh.

A fundraising was carried out in the evening for the benefit of Conquer Cancer, which made € 1,420.

Men’s golf set to participate in the Bucknell Invitational