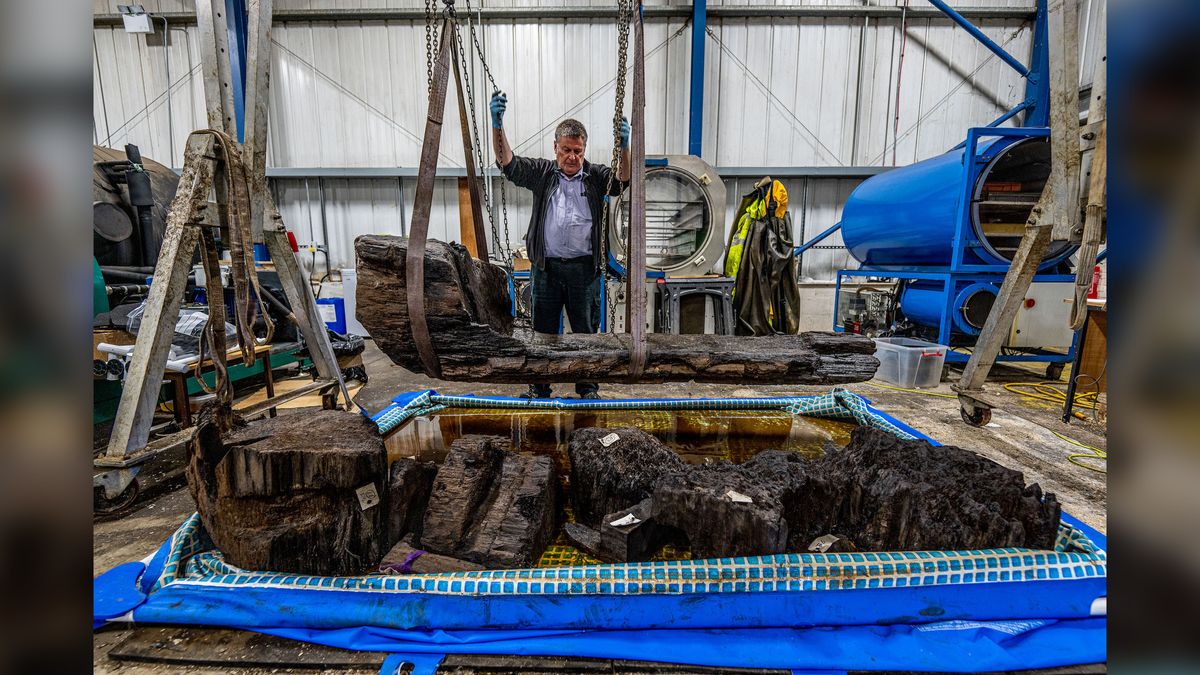 About 4,000 years ago, an elite Bronze Age man was buried with an ax in a hollowed-out log coffin. Now, archaeologists have announced the discovery of this coffin, which was found in an unexpected location: a golf pond in Lincolnshire County, UK.

The wooden-handled ax and the unique burial indicate that the man was a high-ranking individual. After the man’s contemporaries hollowed out a tree trunk slightly longer than a modern telephone booth, they filled it with plants to cushion his body. Then they buried the remains of the man with the ax and built a mound of gravel over the grave – a practice reserved for elite Bronze Age people, archaeologists said in a statement released last week. .

“The man buried in Tetney [Golf Club] lived in a world very different from ours ”, Tim Allen, an archaeologist from Historic England who participated in the project, said in the statement. “But like ours, it was a changing environment – rising sea levels and coastal flooding eventually covered his grave and burial mound with a deep layer of silt which aided in its preservation.”

Archaeologists were stunned by the rare find, which they rushed to keep in July 2019, after Tetney Golf Club reported the accidental find during maintenance work on the course. After securing a grant of nearly $ 97,000 (70,000 pounds) from Historic England, an English history preservation organization, archaeologists have devoted hundreds of hours to the study and conservation of ancient remains , which they hope to exhibit at the Collection Museum in Lincolnshire within a year or two.

Conservation of the artifacts was difficult as they were discovered during a heat wave; archaeologists had to ensure that the delicate coffin and its contents did not collapse after being exposed to air and sunlight.

“Bronze Age log coffins are rare, and their survival after their discovery is even rarer,” Allen said, noting that British archaeologists have only documented about 65 log coffin burials from the bronze age. “Once the wet wood came out of the ground, it didn’t take long to react.

The remains were placed and studied in a cold store for a year, then transferred to the York Archaeological Trust, an educational and archaeological charity in the UK, where preservation work began.

“Organic matter was preserved in humid, airless conditions in the hollowed-out tree trunk,” project leader Hugh Willmott, archaeologist at the University of Sheffield, said in the statement. Some of the organic matter – the needle-shaped leaves of yew or juniper – “can tell us what plants were chosen to cushion the body and even what time of year this man was. been buried, ”he said.

According to a skeletal analysis, the man was around 1.75 meters (5 feet 9 inches), an impressive height for an individual in the Bronze Age. The man died in his late thirties or early forties and probably had osteoarthritis, probably “heavy work rather than old age”, Willmott told the New York Times.

The well-preserved stone-bladed ax from the burial – one of only 12 known in Britain – was probably more symbolic than functional, and may have served as a mark of authority, archaeologists said in the communicated. Additionally, the 10ft long (3m) by 3ft wide (1m) log coffin was from a single, fast growing oak tree that was split lengthwise and then cut up. Part of a wooden lid that covered the coffin has survived, archaeologists added.

The golf club coffin site is now protected as a Listed Monument, meaning it is a recognized archaeological site of national significance in the UK.

Cowgirl Golf is about to open the season

The Lido, Wisconsin’s next great golf course, is a walk back in time