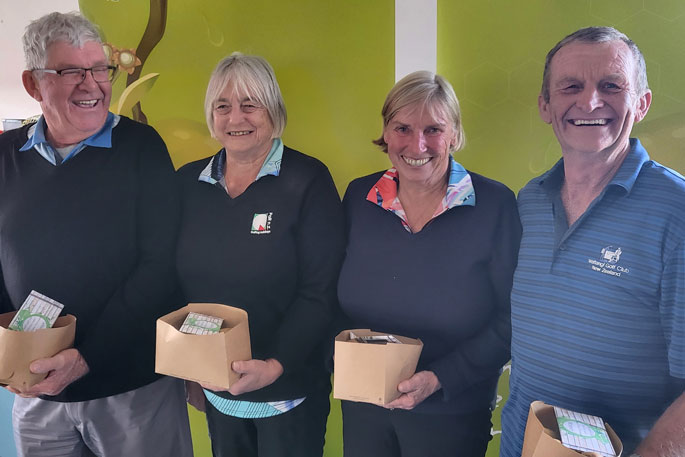 A busy week this week for the Waihi Golf Club with two well organized tournaments.

BIRCHWOOD MIXED TEAMS TOURNAMENT took place on Sunday, in sunny and perfect conditions, with a course in very good condition. This annual match, generously sponsored by Birchwood Packhouse, drew a full field of 26 teams, where the combined team’s stableford total score counted. Each team consisted of two ladies and two men. This hotly contested tournament was won by the team of Raewyn Wright, Jan Robinson, Peter Wright and Brian Robinson with a total of 136 points. Also second with 136 points were Liz and Chris Hale, and Niria and Terry Gerbich, while third place with 133 points were Pip Jones, Jill Morrison, Nigel Sanderson and Frank Van Hattum.

DAFFODIL DAY – MEAT PACK: On Thursday, the club in conjunction with the Katikati Lions Club hosted the annual tournament to raise funds for the Cancer Society. The weather was not good, but about fifty golfers braved the elements to contribute once again to this noble cause. The Lions Club offered a sizzle of welcome sausages to players halfway through and also gave away 23 great prizes for the raffle. Terry Gerbich won the best run of the day on a countdown with 79 roughs, and Alex Standfield won the net with 68. Rob Page had a very good 40 runs to win the stableford. In the senior division, Barry Laurence (Tahuna) had 34, with Peter Wright, Michelle Libby and Mark Tomsett 33. In the junior division: Adele Gunning had 37, with Chris Hale, Peter Bramble (Fairview) and Jill Morrison all was 36.

VETERINARIANS: Another good field played Monday’s stableford competition, while a few others played their matches in the match play competition. Stableford’s round was won on a countdown by Alex Standfield with 39 runs which was also tied by Kaylene Croker. Next come Errol Miller with 38, Anke Hermannsdorfer and Tim Parish, both with 38.

NINE HOLE: This week the second round of the championship in stroke play took place, and in the Women’s Division 1, Margaret Meldrum had the highest score with a gross of 54, followed by Lorraine Meyer with 54 and Glen Bennett (55). In Division 2, Mary-Kate Paterson again led the way with 55 gross, followed by Jill Morrison and Julia Nicolson, both with 58, and Lynda Thomson 60. In the men’s division, Rex Smith with 43 was a far cry from Terry Paterson 53 , and Garth Pritchard66.

WEDNESDAY LADIES: The haggling this week was stableford, and women’s captain Karen Lee showed a clean pair of heels to the rest of the field with 39 points. Next came Nita Dalley, Jenny O’Dwyer and Helen Baynes, all with 35 points, followed by Anke Hermannsdorfer and Jill Morrison with 34. The “Dreamers player of the week” was Karen Lee with her net 69.

SATURDAY WOMEN: staged a net medal haggle, and the winner was Shoneen Dunning with a net of 71, followed by Karen May with 74. Sharon Deacon and Phillipa Harvey both had nets of 75.

SATURDAY MEN: The morning men’s stableford haggle was won by Mark Mora with a very clear 40 points. Second was Tom Rowbotham with 36, followed by Earle White and John Libby with 34, while (Tosser) Jim Powell and Grant Robson had 33 each. not great, but for the second week running Chris Pilmer with 33 points took first place on a countdown from Terry Gerbich. Next, with 32 points, Chris Hale and Mark Tomsett, while Paul Weaver arrived with 31 points.