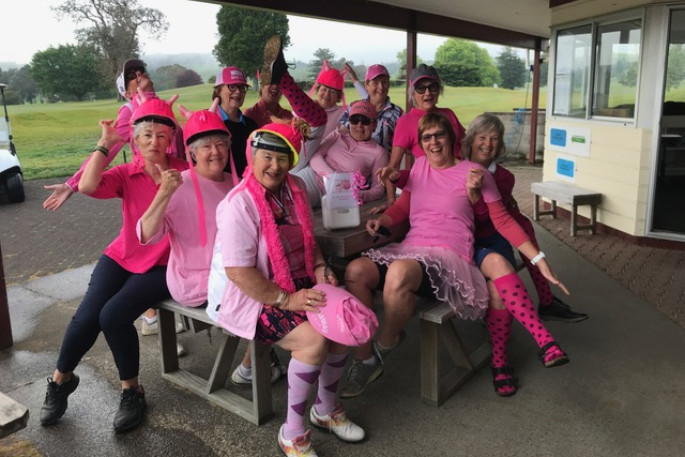 On Wednesday and Saturday, the Waihi ladies turned the course into a sea of ​​pink, all wearing outfits ranging from wigs and stylish to wacky hats. They were all “Playing for Pink” to benefit the Breast Cancer Foundation.

Karen Roche’s (our Club Vice President) magnificent effort playing the whole round in a frilly pink tutu earned her the ‘Best Dressed’ award, with team awards for ‘Breast is Best’ and “Done our Breast”

Two great days with fun prizes and a large raffle table allowed the ladies to raise the fantastic sum of $602.00 for the vital work of the Breast Cancer Foundation.

The “Dreamers Player of the Week” was Susan Mustard with 67 net, on a countdown by Jacquie Bain.

A good field of 29 players played mixed stableford competition, and Lynda Thomson topped the field with 22 points. Next come Carole Hambleton with 18 points, and Christine Mercer and Jill Morrison who both scored 17 points. Then eight more players all came in with 16 points, followed by 4 more players with 15 points.

Near-perfect conditions, with one of the hottest days this spring, set the stage for this month’s event. The big winners were, in the Gross, Andy Roche with a finished 75 one shot ahead of Murray Fraser. In net Sean Brenssell with 66 nett won on a countdown from Howard Anderson, but Howard’s 42 stableford points allowed him to win the Stableford competition. For the rest of the field, in Division 1, Chris Pilmer with 39 points, who is ahead of Nic Davies, Richard Taitoko on 37 points, while Terry Gerbich has 36. In Division 2, Peter Wright, with 39 points, finishes just ahead of Greg Bundle and Peter Dagg who both recorded 38 points. This was followed by Willie Lynch and David Campbell with 37 points, while Mike Rose, Jill Morrison and Denise Morgan all had 36 points.

Held his branch’s AGM on Saturday morning. Andy Roche (captain) and Wilson McGillivray (secretary) were both elected unopposed. To end the day, after golf, the trophies won during the year for the various men’s competitions were presented to the recipients by Club President Daryll Denyer.

The results of today’s stableford haggling were in Division 1, the winner was Daryll Denyer with 37 points, on a countdown from the very unlucky Frank Van Hattum. Next come Jason Baldwin, Wilson McGillivray and Richard Taitoko with 36, and Chris Pilmer with 35. In Division 2, Des John’s enjoyed his run of the year scoring 40 points, just ahead of Gary Towler with 39. Tom Rowbotham and Peter Wright both scored 38, while Ken Purcell and Jock Stronach had 37.