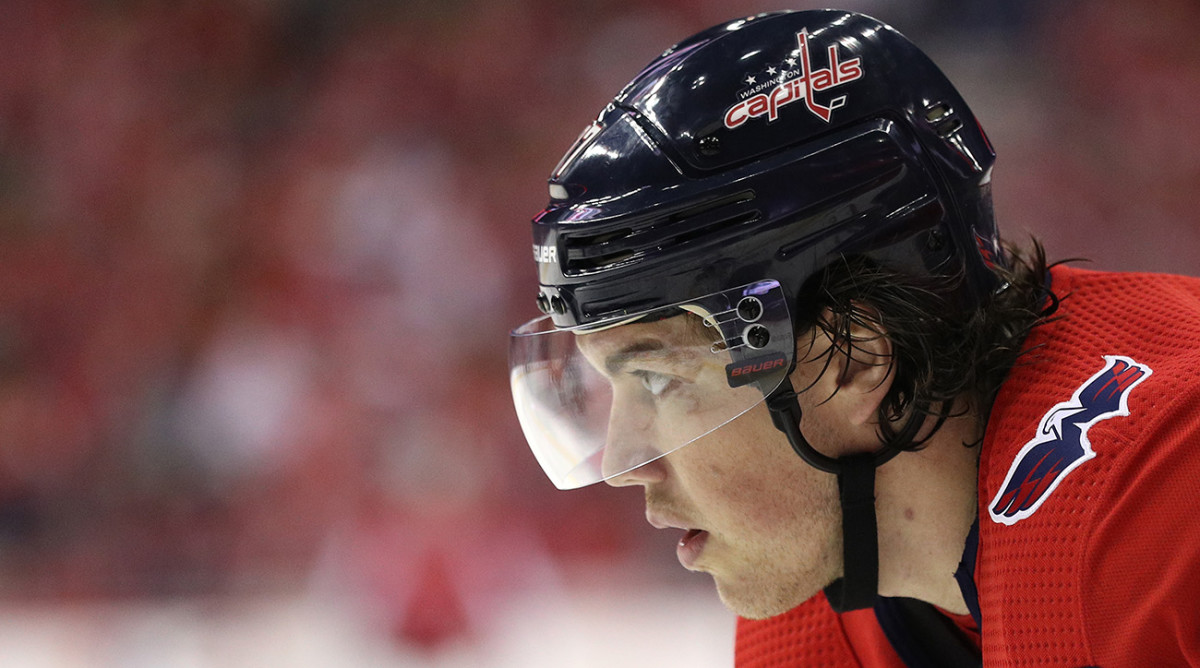 With the summer over and the NHL season underway, the quest for the Stanley Cup has resumed.

Capitals winger TJ Oshie hopes to lead his team to back-to-back titles after helping Washington win their first Stanley Cup in franchise history in June against the Las Vegas Golden Knights. As Oshie focuses on the new season, he spoke with Illustrated sports about his title celebrations, his day with the Cup and the team’s transition from a new head coach to Todd Reirden.

(Editor’s note: This interview has been edited and condensed.)

Charlotte Carroll: For your partnership with M & Ms, fans could win a meet & greet. What does it mean to be able to interact with them?

TJ Oshie: It’s great for me because when we’re out there on the ice or on the practice rink here there’s always glass in the way. You don’t really have the opportunity to interact. I just see how they feel over the seasons, or maybe how long they’ve been a Caps fan, or maybe when their first game was. Meeting and welcoming is my favorite.

CC :What’s the most memorable fan experience you’ve ever had?

TO: There is a little girl here. We met through Make a Wish, not sure if she was a fan of me or the team before. But she’s a huge fan now, her name is Abby, and we’ve become friends over the past couple of years. Just seeing her face light up. And she has her lucky earrings that she wears on match days and I see her at a bunch of Caps events now. It’s the best fan experience for me.

CC :You spent part of your day with the Cup where you spent your high school years, in Warroad, Minn. How was it ? Did it live up to what you imagined?

TO: It was very special for me. Ever since I moved to Warroad my dream, if I ever won the Cup, was to bring it back there, so it worked out really well that I could get on it. So the first part of my day they declared July 24th as TJ Oshie Day which I guess you don’t even really dream of, doesn’t seem like a possibility so you don’t even care. It was really nice of Bob Marvin, the mayor, to do for me. And also to bring the Cup to the rink where I spent countless hours with my teammates. And then we took this thing we call a whip, which is a little drive around town that you do in your car just to kill time when you’re in high school, so I could’ve taken the Stanley Cup for a whipping in one of Bob Marvin’s classic cars which was actually FDR’s country car so it was a pretty amazing day when you think about everything that happened to me so I thank Warroad for the ease with which they were to have the Cup there.

After hoisting their Stanley Cup banner, the Capitals continued to celebrate

CC: Are you going to go back there on July 24 and celebrate your day?

TO: (Laughs) I think I have to. It’s a good excuse to go back up there. It’s hard to travel with the two young girls now, but July 24 is going to be on the calendar for a little while.

CC :After winning the Cup, you gave a touching interview and talked about your dad with Alzheimer’s disease. What did it mean to share the victory with your father?

TO: It was very important to me and it was a special moment to share together. My dad was one of those fathers who were always in the garden playing with you. He’s usually always the guy who loses (laughs) when you play in the garden to keep you happy. It was really like when I was a kid and we pretended to win the Stanley Cup in the backyard. It was the same, except that with his diagnosis of Alzheimer’s disease, it made it even more special that I was able to win a Stanley Cup when he can still understand, remember and enjoy the moment.

CC :On a lighter note, you went viral for drinking beer through your t-shirt, did you also make cup stands in the minds of your teammates?

TO: Another great idea I had was the Cup stand. It was right before we went into the fountain so there was a bit awkward moment and there were fans all around us and we were just hanging out and partying and they were just chanting people’s names so I guess I don’t know we would do a cutting stand. It was kind of fun and cool that we had something that no one else had done before to have our own thing.

CC :Would you say it’s the weirdest thing you or your teammates have done with the Cup this summer? Or is the rest confidential?

CC :Was it difficult to flip the switch and move on to a new season after such a long summer of celebrations?

TO: I do not think so. I think it’s kind of nice to come back with the guys and start making our way to another Stanley Cup. Once you get to that level and see how fun it is to win and how rewarding it is, it’s easier to return to the weight room or resume training and to start working to achieve that feeling because you never want to let it go.

CC :How did the transition from coach Barry Trotz to Todd Reirden go?

TO: It was awesome. Reirds has been very good to us. His coaching style is like a player coach, but he says the right things when the things need to be said, when we are not playing well in a specific area of â€‹â€‹our game. He approaches it; he approaches it quickly and very directly. On the other side, he listens to what the guys are thinking. Maybe if it’s a day off or a day when we have to work a little harder or a day when we have to fight. He can read these situations very well. It was really fun coming to the rink every day. It should always be like that in hockey, but sometimes the season is long and with Reirds I think he’s going to keep it cool. So that was fun.

CC: In a recent interview, you said that you don’t really like watching hockey. Why is that?

TO: Since I was a kid my dad watched a lot of sports, really all sports. I just remember watching for about five minutes and then I’d rather go outside and play this sport. My favorite thing to watch is golf. Even though it’s the Masters, if I watch for a few hours I’ll end up grabbing the clubs and heading to the course and missing the second half of the show. I would always rather play this sport than watch it, so I tend to stay away from sports on TV.

CC :Make people watch golf with you, I know sometimes it can be hard to get a crowd on TV because it’s so much better in person.

TO: Yeah, the woman doesn’t watch golf too much with me. I’m lucky if my stepfather passes. Sometimes I persuade one of my little girls to watch golf with me downstairs if they stay on the couch, get a treat or whatever. It ends up working for me. It’s all in good fun.

CC: Do they watch other sports with you?

TO: My youngest Leni loves to watch hockey. She thinks everyone is Daddy onscreen. So I try to explain to her that I am sitting next to her. But she still thinks everyone who’s on skates is me, so she might be a hockey watcher someday.